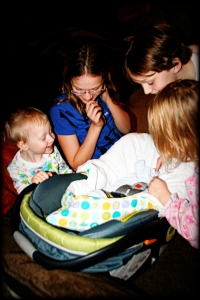 Gaelynn was born in 2000 and was named after her maternal and paternal grandmothers but the name is also Irish Celtic and means “beautiful storm.” Gaelynn is gifted in language and reading. She loves horses and wants to be a Veterinary Physician one day.

Israel was born in 2003 and was named after the Biblical figure, but his middle name “Kirk” contains a tribute to his paternal grandfather. Israel is gifted in the sciences and mathematics. He loves technology and wants to build robots when he grows up.

Sophia was born in 2007 and was named from the Biblical verse Matthew 11:19 as it is rendered in the original Greek. Sophia loves being the center of attention and is talented at drawing a crowd. She says she’s going to be a princess and live in a castle someday.

Liam was born in 2009 and was named for many people that have made an indelible impact on the lives of his parents. Basically almost anyone named “William” that has accomplished great things, but also for his paternal great-great-great grandfather William Ferguson. Liam likes sports, being chased, and long hugs.

Xander was born in 2012 and his name is also a tribute to many people important in the lives of his parents. Most notably that of Bruce Alexander Gillespie, Jr. who passed away in the Summer of 2011. Despite his wild appearance, of red hair and ruddy complexion, Xander is a tranquil and peaceful child. The last of the children of my household, much about who he is remains yet to be revealed.

These are all my pretty ones.